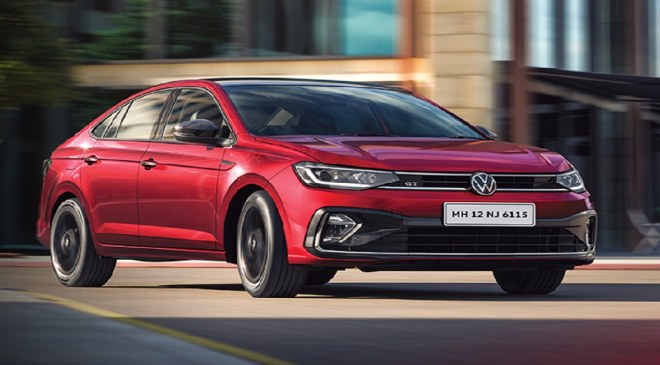 Volkswagen India is all set to launch the Virtus compact sedan on June 9. Pre-launch bookings are underway and the sedan is already on display at Volkswagen dealerships. The petrol-only sedan will be offered in two broad trims and six variants. If you had your eyes set on one, then here are the top five things you need to know before signing the dotted line.

The Virtus sure does look vogue and premium with a design that will stand the test of time very well. This author’s favourite angle is the rear three-quarters, where it looks like a mini Jetta. Pick the Dynamic Line and you also get differentiating design touches such as blacked-out wheels, GT badging, and a subtle rear spoiler.

The Virtus’ interior design mimics the Taigun with a minimalistic and straight forward dashboard design. The Tech Line gets a black/beige seat cover while the sportier Dynamic Line gets black seat covers. Plus, if you opt for the red in the GT Line, you get a colour-coordinated insert in the dashboard.

Read More:-Here’s What Citroen C3’s Two Variants Pack For You

Passenger safety will be taken care of by up to six airbags, electronic stability control, ISOFIX child seat mounts, a tyre pressure monitoring system, and rear parking camera with sensors.

The Virtus will be offered with a choice of a 115PS 1-litre and 150PS 1.5-litre turbo-petrol engine. The latter gets cylinder deactivation technology, shutting down two cylinders under light load for improved fuel economy. Speaking of transmission options, the 1-litre can be had with a 6-speed manual and automatic, while the 1.5-litre is exclusively available with a 7-speed DSG.

The Virtus is expected to be priced from around Rs 11.5 lakh (ex-showroom), putting it in contention with the Honda City, Maruti Suzuki Ciaz, Hyundai Verna, and the Skoda Slavia.