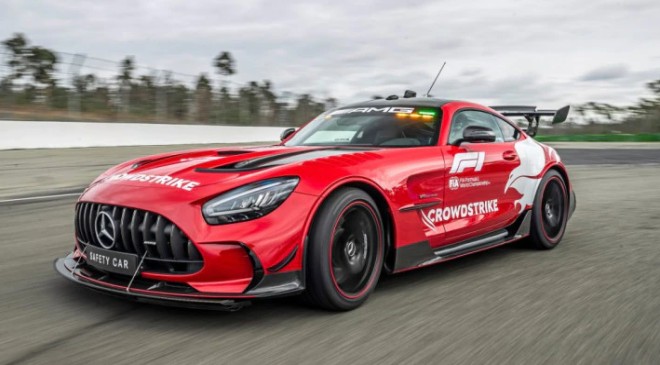 The first Mercedes-AMG GT Black Series has made it to India! Only two units have been allocated for our country (out of 55 units in total), and each of them is priced from Rs 5.5 crore (ex-showroom, pan-India) without individual configurations. As for the car itself, it’s so extreme that Mercedes had to make zero changes to the engine when modifying the AMG GT Black as an Formula 1 safety car.

How fast is the Mercedes-AMG GT Black Series?

The AMG GT Black is powered by a 4-litre twin-turbo V8 petrol engine which makes 730PS and 800Nm. It powers the rear wheels via a 7-speed dual-clutch (DCT) gearbox, and helps the supercar get to 100kmph in just 3.2 seconds. In fact, it takes less than nine seconds to reach 200kmph, and offers an Autobahn-worthy top speed of 325kmph!

In 2020, the AMG GT Black broke the record for the fastest road legal production car around the Nurburgring racetrack in Germany. It managed the circuit in just 6 minutes and 43 seconds!

In addition to its powerful engine, the AMG GT Black gets AMG Ride Control adaptive suspension with adjustable damping settings. While that’s usual fare for a top-dollar supercar, the AMG GT also gets manually adjustable camber settings and adjustable anti-roll bars – both on the front and rear axles!

Inside, it gets orange-and-black themed interiors courtesy of the AMG Interior Night Package  and carbon fibre bucket seats as standard. Optionally, you can get the standard AMG Performance seats, instead. Apart from that, it has an F1 car-like yoke steering wheel, too!

The Mercedes-AMG GT Black Series is a high-performance track car in road-legal, sheep’s clothing. It’s undoubtedly very expensive – it beats the Lamborghini Huracan and even Mercedes’ own ultra-luxurious flagship, the Maybach S 680, in price. But given its extreme, exclusive race-built nature, it’s no wonder that a well-heeled Indian buyer has already snagged the first of the pair of supercars destined for India.