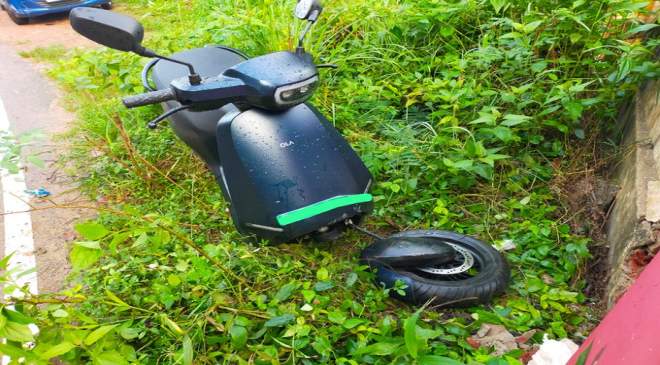 The video shows an Ola S1 Pro electric scooter lying on a piece of cardboard. Moreover, the owner holds the broken stands in his hands to show the viewers. Furthermore, the owner claims that he called roadside assistance, which took 3 hours to reach his place. The owner also claims that it will take them three days to fix his scooter’s stand.

Other than that, there have been cases in which the owners reported the broken front end of the scooter, including the suspension. In addition, there have been some cases where the scooters faced a software glitch putting the scooter abruptly in reverse mode. Some users have also complained about the battery of the electric scooter suddenly dying without any warning.

Most of the customers took on social media to get their problems addressed. However, one of the consumers was not very calm about the problems. The owner from Tamil Nadu set his Ola S1 Pro electric scooter on fire on the side of a road because he was not satisfied with the scooter’s performance and the company’s services.

In addition, the company has been surrounded by problems on the government’s side as well. After the fire incidents government ordered a probe along with ordering an agency to investigate the fire incidents. According to the preliminary findings, Ola Electric’s battery cells and battery management system were found to be defective. According to another report, the manufacturer was sourcing low-grade materials to reduce costs. The government has even summoned EV manufacturers to testify about their use of such low-grade materials. Ola’s findings, on the other hand, indicate that there was no problem with the battery management system and that the fire was caused by an isolated thermal incident.