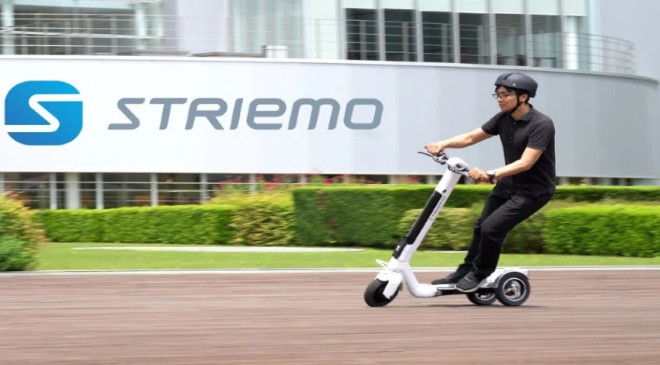 Called Striemo, it is slated to go on sale later this year in Japan

Honda has announced the establishment of a focussed micro-mobility business called Striemo Inc, which is a business venture originated from Honda’s new business creation program. The first product from this new subsidiary is a smart, self-balancing one-person electric three-wheeled scooter, called the Striemo.

This new e-scooter features a balance assist mechanism that enables stable riding, thus reducing the likelihood of falling. The details of the balancing mechanism are not known, but it is likely to be based on a gyroscopic system.

Read More:-Norton Launches The V4SV Superbike, A Track Bike Reimagined For the Road

The Striemo comes equipped with three speed modes capped at 6 kmph, 15 kmph and 25 kmph. Honda claims a range of up to 30 km in a single charge, while the time taken to completely replenish the battery is 3.5 hours. The scooter is also foldable and weighs a measly 20 kg, while boasting of a load carrying capacity of 120 kg.

Details of the battery pack too have not been revealed; however, Honda is part of the ‘Swappable Batteries Consortium’ involving Kawasaki, Suzuki and Yamaha. The Striemo is treated as a Class 1 motorized bicycle as per Japanese regulations and requires a license, helmet, registration and insurance. In other countries, local laws would apply depending on the power output of the electric motor.

Honda has stated that the Striemo will go on sale in Japan before the end of this year, and in Europe in 2023. The Japanese version of this mobility scooter is priced at 2,60,000 Yen, which is equivalent to Rs 1.50 lakh. For this price range in India, you can opt for traditional electric scooters like the Ather 450X, Ola S1 Pro, TVS iQube and Bajaj Chetak.