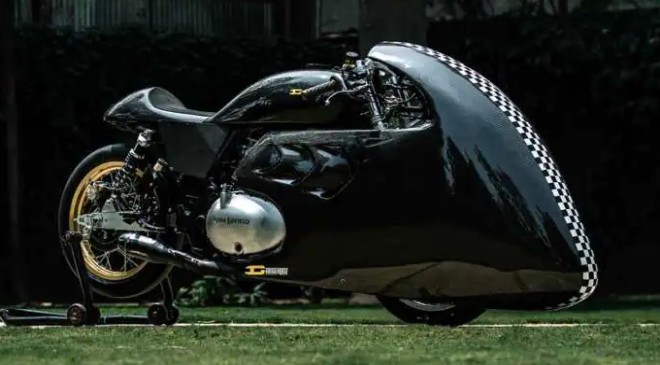 Royal Enfields are not only popular among the consumers, but they are also a popular choice among the modifiers. The classic bikes are subjected to the creativity and aspirations of people who want something different than usual. Talking about the modifications, there have been a whole lot of people who have modified the bike to be a scrambler or a cafe racer but have you ever seen a Royal Enfield modified to a drag racer? If not, here we have an example of one such example.

Looking at the bike, it’s not hard to tell that the bike’s design has been significantly changed. The modifiers have given the bike a bulky appearance while making it aerodynamic. Adding to it,  The fuel tank lid, as well as the side panels and tailpiece, are all made of carbon fibre. Although the instrument console stays stock, it gets CNC-machined clip-on handlebars and aftermarket grips.

As for the hardware, the bike has been equipped with an RCB brake master cylinder, along with a UMA racing quick-throttle and a quick-shifter clutch. A new subframe, adjustable swingarm, and new yokes with adjustable rake have also been installed by the workshop. The front forks have been stiffened and lowered, and the stock rear shock absorbers have been replaced with new YSS preload-adjustable shock absorbers. The 18-inch wheels have been replaced with lighter 17-inch wheels with Michelin racing rubber on both ends.

Read More:-Hyundai Stargazer Teased In Indonesia; Could Head To India As An Ertiga, Carens Rival

A fast bike obviously needs a powerful engine, to fulfil the need, the engine has been modified to have a greater power output. The engine now gives out 62.2 hp, which is 15.2 hp more than the usual 47 hp. To enhance the performance, a pair of velocity stacks have been installed for improved breathing, and a custom-built two-in-one exhaust has been installed.