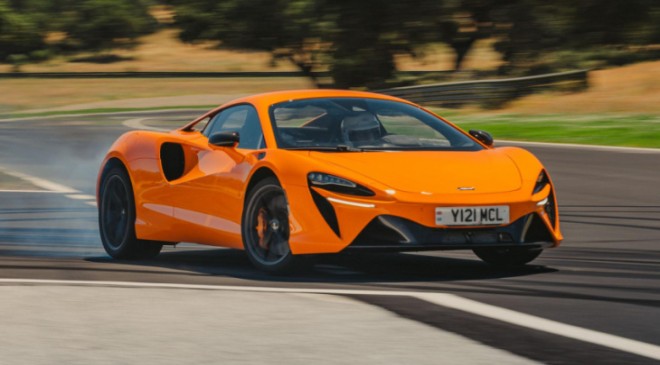 When the McLaren Artura broke cover in February 2021, it marked a new era of electrification for the carmaker, as it was the first series-production hybrid supercar to come out of Woking. Fast forward to 2022, and McLaren’s decided to make it race worthy in the form of the Artura GT4 customer race car.

To make it fit for racing competition though, one major sacrifice had to be made, and that is getting rid of the hybrid setup since GT4 regulations don’t allow hybrid engines. The upside here is that the supercar loses 130kg through that alone. While the losing the hybrid motor will affect performance, McLaren suggests its 3-litre twin-turbo V6 petrol engine can still produce more than enough grunt even though performance figures haven’t been revealed.

With the battery pack  gone, in place of it is a 110-litre fuel cell and ancillary drive system. Another major mechanical change comes in the form of a 7-speed gearbox replacing the road car’s 8-speed automatic gearbox with shorter gear ratios.

Other motorsport enhancements include a wider front track, a rear mechanical limited slip differential, better dampers, and a Bosch Motorsport ECU to help it be competitive around a race track. It also gets a couple of driver aids in the form of ABS and traction control that are adjustable for different track conditions.

Being a track-focused racer, it comes as no surprise that the Artura GT4 looks the part. It’s got an aggressive body kit which includes a prominent front splitter as well as a new rear wing with various levels of adjustability depending on the racetrack.

While the McLaren Artura GT4 will have to wait until 2023 until it makes its competitive racing debut, it will make its public debut at the ongoing Goodwood Festival Of Speed that is running from June 23-26.