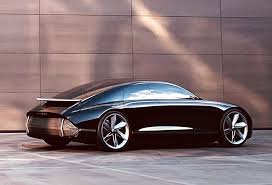 The Hyundai Ioniq 6 electric vehicle is the production version of the sleek Prophecy concept, and joins the Ioniq 5, Kona EV in the brand’s increasing EV portfolio globally. Hyundai is yet to reveal specifications and pricing of the electric sedan.

Hyundai Motors has revealed the production version of the Ioniq 6 based on the sleek Prophecy concept electric vehicle which was showcased to the world earlier.

Hyundai has revealed only the design of the Ioniq 6 electric sedan though, so we’ll have to wait for details on specifications and pricing.

Hyundai claims that the Ioniq 6 has a drag coefficient of 0.21, among the lowest in the world which was achieved with the shape of the car, plus active grille openings, the spoiler and vents at the rear, underbody panels, and the optional camera mirrors.

The Hyundai Ioniq 6 is among the better looking electric vehicles globally and has a little spoiler at the rear and the unusual vertical accents on the rear bumper.

Inside, the Hyundai Ioniq 6 has a similar cabin design as the Ioniq 5 with 12-inch screens for instruments and infotainment, and a similar dashboard and steering wheel design.

While Hyundai has not mentioned it, the EV will be based on the Group’s E-GMP platform housing cars like Ioniq 5, Kia EV6 and Genesis GV60. So it will have an 800-volt battery system with the ability to power appliances.

Hyundai has not revealed the pricing and specifications of the Ioniq 6 but we expect it be priced over and above Ioniq 5 hatchback.