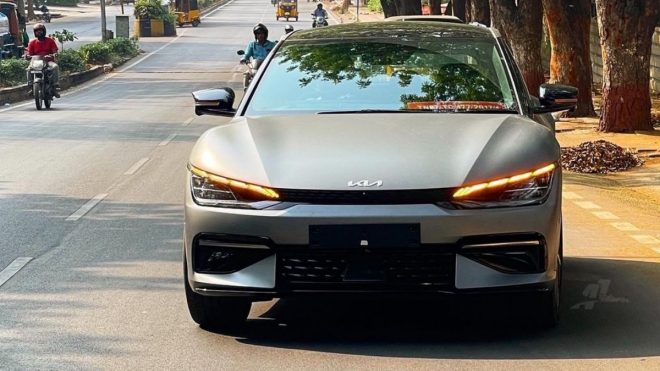 Kia has installed India’s first 150kWh charging station at its dealership in Gurugram as part of its plan to develop EV infrastructure in the country. The Korean brand says it aims to install fifteen 150kWh chargers across 12 Indian cities by the end of next month.

Kia says that the DC fast charger can charge the EV6’s 77.6kWh battery from 10-80 percent in less than 42 minutes. Since the EV6 can accept upto 350kWh of DC fast charging, the new charger is a much better alternative to the standard 22kWh wall box charger.

Kia’s chief sales officer, Myung-sik Sohn said, “We believe that such fast-charging solutions will take away issues of range anxiety and charging time that EV owners face.” The brand’s new charger is also compatible with EVs from other manufacturers, allowing cars which support 150kWh fast charging to use this facility.

Kia recently launched its flagship EV6 crossover in India and will sell it via the CBU route, with deliveries set to begin in September. The EV6 has a claimed range of 528km and is limited to just 100 units for 2022.

Meanwhile, sister brand Hyundai is gearing up to launch the locally assembled Ioniq 5 in an effort to have a competitive price advantage over the EV6. Kia and Hyundai are also planning on introducing six new EVs in India by 2024, which include the Kona facelift and the e-Niro electric crossover.