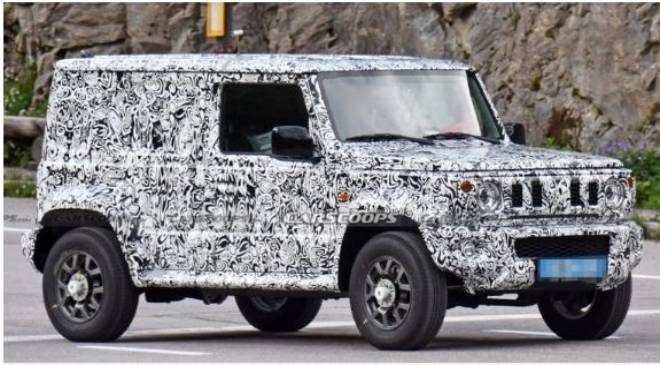 Maruti Suzuki Jimny for the Indian market has been in discussions for a while now. However, things are developing now at a faster as recently, one of Maruti Suzuki’s top officials gave a hint that the off-roader SUV can be launched by the end of 2022. Following the statement, spy shots of the Maruti Suzuki Jimny five-door version have surfaced, pushing more towards the confirmation of the launch date of the new SUV. Rumors are that the five-door version of the SUV will be launched in the Indian market. However, spy shots of the camouflaged test mule have been taken in Europe.

The spy shots of the Maruti Suzuki Jimny five-door version show quite a few details of the car, courtesy of Carscoops. For instance, it is clear that the five-door version is slightly longer than the three-door version on sale in the global market. It is no surprise that the dimensions had to be increased to accommodate the extra two doors. However, the SUV retains its boxy design, which gives the Jimny its core personality.

Even in the five-door version, the Maruti Suzuki Jimny retains its features like round LED headlamps, which for the Indian, share slight similarities with the Force Gurkha. Moreover, other details like the front grille, 16-inch alloy wheels, and spare wheel on the tailgate are very similar to the earlier version.

The spy shots also reveal slight details of the cabin of the Maruti Suzuki Jimny, which shows the three-spoke multifunctional steering wheel and an instrument cluster with kind of a retro look. Adding to it, Jimny gets a touch screen infotainment system which might get the controls for other multiple functions.

Expectations are that for the Indian market, Maruti Suzuki Jimny will have a 1.5-liter four-cylinder naturally aspirated K-series engine. A similar engine has been used in the Indian manufacturer’s other models like the latest Maruti Suzuki Brezza, Ertiga, and XL6. Upon launching, the Jimny will be directly going against the already established rivals Mahindra Thar and Force Gurkha in the off-roader SUV segment.