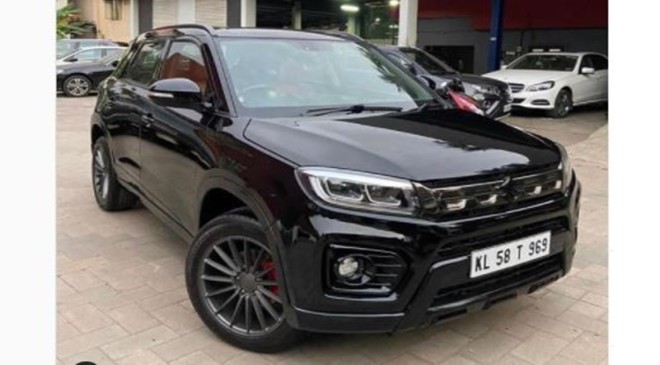 The 2022 Maruti Suzuki Brezza has been launched in India with a modern look and a modern appeal. Right after the commencement of the bookings, the SUV has got 60,000 bookings within a week. But there is one thing that can increase this number even further. The one thing that has been missing from the car is an appearance with an element of the classy dark look. To fill the gap, here is a black render of the Brezza, which adds to the car’s personality and might be appealing to a lot of enthusiasts. But why is the black Maruti Suzuki Brezza more appealing than any other regular Brezza? Well, the dark look adds to the modern design and the butch looks of the Brezza. It might not come as a surprise if you might witness similar versions of the SUV on the road.

Talking more about the looks, the newly designed front fascia combined with the dimensions of the car and the black colour gives it a bigger road presence. Moreover, it gives it a personality of what a big bulky SUV might look like when cruising through the streets. To give you an idea, it might be similar to what a Tata Harrier Dark Edition or Hyundai Creta Knight Edition might look like on the road compared to the other regular ones.

Getting into the details of the powertrain of the new Maruti Suzuki Brezza, it gets a 1.5-litre 4-cylinder K-series petrol engine that gives out 103 Ps of power and 135 Nm of peak torque, which is slightly less than the power output of the old engine, which produced 104 Ps and 138 Nm of peak torque.

The brand-new Maruti Suzuki Brezza has costs starting at Rs. 7.99 lakh (ex-showroom) and reaching as high as Rs.13.96 lakh (ex-showroom). It makes the new Brezza one of the most expensive options in its category. However, buyers get a plethora of additional features on the brand-new Brezza for the hefty price. The all-new Brezza is a significant improvement over the outgoing model, with a 360-degree camera view system, an electric sunroof, a 5.5-inch head-up display (HUD), wireless phone charging, and more.