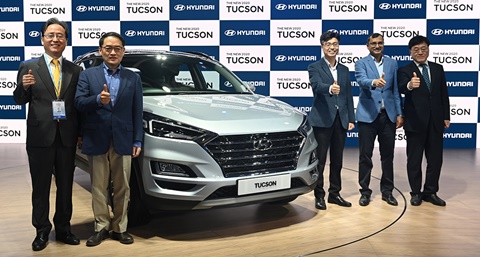 The new Hyundai Tucson will be revealed in India tomorrow ahead of its launch in the coming weeks. The Korean carmaker’s flagship SUV is in its fourth iteration and promises to bring plenty to the table, including a new design language, an upmarket interior, plenty of techy kit and probably, cleaner powertrains as well.

Here are five things you need to know ahead of its unveiling:

The Hyundai Tucson debuts the carmaker’s new ‘Parametric Dynamic’ design language, an evolution of its ‘Sensuous Sportiness’ theme. So what you get is plenty of sharp and aggressive lines that give the SUV a sporty look. Plus, you get a bold front grille with split LED headlights and the DRLs integrated into it.

But in this author’s opinion, it’s the rear-end with the fang-like connected LED tail lamps that stand out.

Inside, the Tucson’s cabin is minimalist with plenty of touches inspired by luxury cars. For instance, the digital driver display is similar to Mercedes’ new offerings, while the faux AC vents resemble the one seen in the Q8. It’s also minimalistic with most of the controls now touch-oriented.

The outgoing Tucson came with a 2-litre petrol and diesel engine putting out 152PS and 185PS respectively. The petrol unit came with a 6-speed automatic, while the diesel engine got a new 8-speed automatic as well as optional all-wheel drive. Hyundai could carry forward the same engine options in the 2022 model initially. Internationally, there is the choice of a plug-in hybrid as well.

At an expected starting price of around Rs 25 lakh (ex-showroom), the new Tucson will face competition from the Jeep Compass, Citroen C5 Aircross, and the Volkswagen Tiguan.