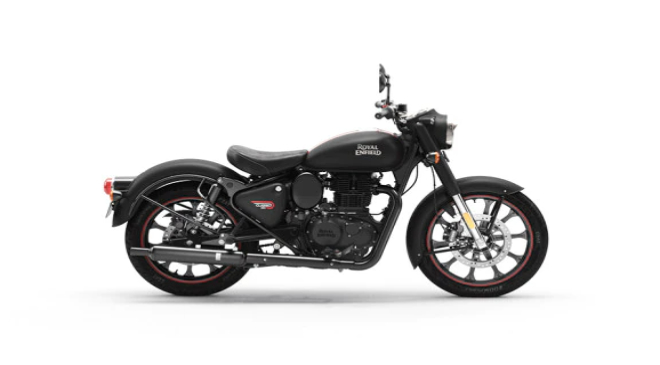 New spy shots of the new-generation Royal Enfield Bullet 350 have surfaced on the internet. This development comes a few months after the bike was spotted testing for the first time. It is based on the J-series platform, the same as the Meteor 350 and Classic 350.

In terms of appearance, the upcoming Bullet 350 looks indistinguishable from its sibling, the Classic 350. Only when you give it a closer look, do you find key differences like larger mudguards, missing fuel tank rubber grips and a rectangular fuel cap. Adding to the change is a wide single-piece seat, contrary to the Classic’s split seat setup.

The bike features a nice sleek teardrop-shaped fuel tank with a mid-rise handlebar and mid-set footpegs for an upright riding posture. What’s different on the test mule is the taillight. RE has done away with the old-school rectangular taillight and replaced it with a circular unit with round indicators on either side.

That said, in terms of styling we can expect new colour schemes and graphics, but more or less the design remains unchanged. Based on the J-Series platform, the Bullet 350 will be powered by the 349cc engine and is most likely to produce the same 20.4PS and 27Nm. Even the throttle map and ignition timing are likely to stay identical to the Classic 350.

The upcoming Bullet 350 features a telescopic fork and dual shock absorbers suspension setup. For braking, it gets a disc up front and a drum brake at the rear, and it rolls on wire-spoke rims.

We expect the Royal Enfield Bullet 350 to break cover by February 2023 with an expected price tag of Rs 1.80 lakh (ex-showroom).