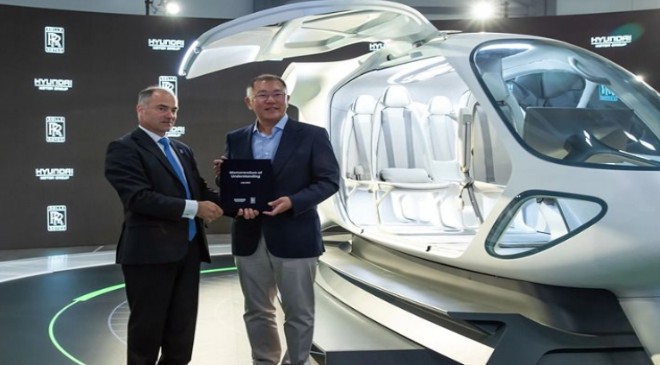 Hyundai has paired up with jet engine builder Rolls-Royce to build hydrogen fuel cell-based propulsion systems for its upcoming urban and regional air mobility vehicles (UAM and RAM, respectively). For now, Hyundai has revealed a concept cabin for its vertical takeoff and landing (eVTOL) air taxi. We’ll get to see a demonstration of the flying hydrogen electric vehicles (EVs) as early as 2025, and the first UAM services will be launched in the US in 2028.

Advantages of Hydrogen as propulsion fuel

Hyundai’s cutting edge air taxi initiative is built on the premise of using low or zero emissions vehicles for intra-city and inter-city travel. With Rolls-Royce’s expertise, the carmaker will develop a novel propulsion system, likely using a set of electric motor propellers that draw power from an on-board hydrogen fuel cell.

The aviation industry accounts for a significant chunk of global greenhouse gas emissions, and just like other forms of transportation, it is striving to reduce its emissions wherever possible. Battery-electric powertrains are not practical for aircraft due to the heavy weight of battery packs, but fuel cell technologies are being developed for aviation use by companies such as Zero Avia.

Apart from fuel cells, Hydrogen can also be used as a combustion fuel in jet engines. Hydrogen jet engines and sustainable jet fuel are being tested in real-world conditions on aircraft. We could see these alternative propulsion systems in commercial flights in the coming years.

When will Hyundai release its flying taxis?

Hyundai promises a demonstration of the novel fuel-cell aircraft in 2025, and the first short-range urban mobility flights are expected in 2028. Initially, Hyundai’s service will be limited to select cities in the US. The carmaker plans to begin regional mobility services using longer-range flying EVs in the 2030s.

Hyundai’s air taxis will present an all-new form of city transportation that hasn’t been seen before. It’ll be interesting to see their hydrogen-powered drivetrain in action, especially for regional flights that are currently serviced solely by jet or propeller aircraft. Hyundai will still have to contend with existing challenges for hydrogen – its mass-scale production, transportation and storage. But we expect more innovative solutions to come up in these domains as well in the coming years.