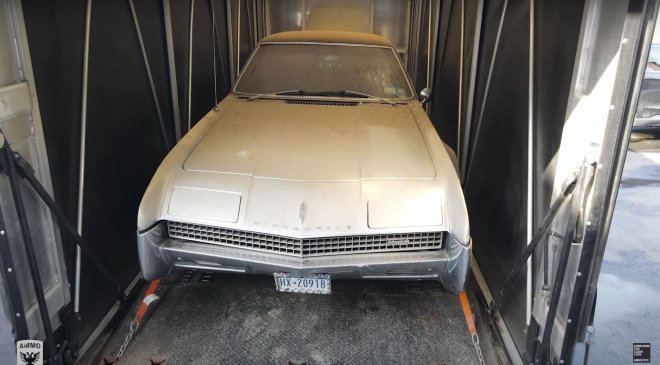 This classic american coupe was home to a mouse family that moved into the spacious trunk.

The 1967 Oldsmobile Toronado was powered by a massive 7.0-liter V8 engine that produced 385 horsepower (287 Kilowatts) and 480 lb-ft (651 Newton Meters) of torque. This brute of an engine was mated to GM’s 3-speed automatic Turbo-Hydramatic 425 transmission. The front-wheel drive Oldsmobile Toronado was the fastest front-wheel-drive car on sale at the time with a top speed of 135mph.

This particular Oldsmobile Toronado was packed away in a garage where dust and rats slowly eroded the beautiful American coupe into a car in need of serious love. The team at Ammo NYC is no stranger to extremely dirty barn finds, and their expertise allowed them to reverse decades of mouse damage into a beautiful finished product.

After removing all of the years of dirt and mouse droppings, the talented Ammo NYC detailing team worked to restore the interior and exterior of this forgotten Oldsmobile Toronado. The final result is a beautiful classic piece of American car history ready for its wedding day duties.