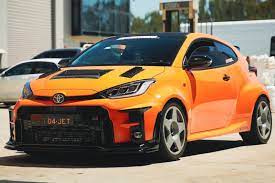 The G16E-GTS Inline-3 only needs one mechanical mod to make over 500 horsepower.

Motive Video is an Australian YouTube channel that focuses on aftermarket tuning for performance cars. They are well known for their Toyota GR Yaris build that saw them take their little hatchback from stock to over 500 horsepower. Motive Video also set the record for the fastest GR Yaris at the drag strip with a record-setting time of 10.8 seconds.

All of this experience pushing the limits of the GR Yaris platform means that the Motive TV team knows a thing or two about tuning Toyotas’ new turbocharged inline-3. The all-new G16E-GTS is a 1.6-liter turbocharged inline-3 that produces 268 horsepower (200 Kilowatts) and 273 lb-ft (370 Newton-meters) of torque in the GR Yaris. For the larger GR Corolla, the G16E-GTS produces 300 horsepower (224 Kilowatts) and 295 lb-ft (400 Newton Meters) of torque.

The G16E-GTS may be impressive in stock form but a few simple mods can unlock even more power from this inline-3. The team at Motive TV noted that they noticed plenty of inconsistencies in the dynoing of their GR Yaris. They believe this is because the GR Yaris is working to make sure its all-wheel-drive system is not overheating. The stock ECU of the GR Yaris would also introduce inconsistencies like adding an artificial redline during pulls or pulling timing at the top end of the rev range.

With the Yaris’s unique quirks addressed during dyno runs, the team could identify which modifications are worth your time and money. Easy mods like a tune are certainly worth the investment and added a noticeable amount of power. Modifications like an intake or exhaust didn’t add noticeable power but did add noise that is missing on the stock car.

As you approach higher power levels the only mechanical issue the team found on the G16E-GTS was the stock valve springs. Valve float was noticed at higher RPMs after the tune was added some a stronger set of valve springs were added to compensate. While adding in the valve springs you might as well add new performance camshafts, which is exactly what the Motive TV crew yielded a dramatic performance gain.

As the build continues the mods keep piling on until you reach over 500 horsepower in the tiny GR Yaris. What mods would you add to your GR Toyota hot hatch?