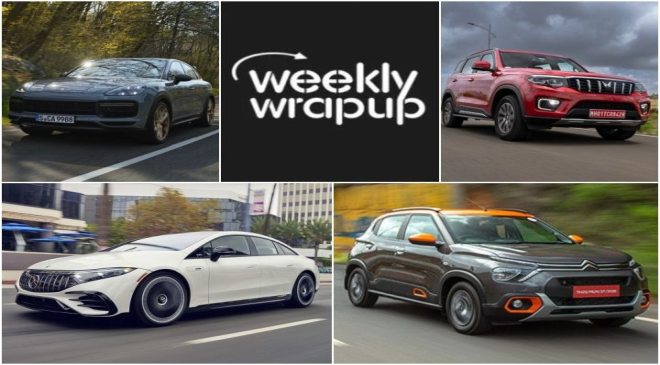 The past week was packed with news about ICE and electric vehicles spanning multiple segments that are set to arrive in India. Porsche launched a new performance SUV, and the country’s largest carmaker, Maruti Suzuki, announced the arrival of two all-new vehicles.

For more such stories that you missed on your news feed, here’s a full roundup of the major news from last week:

French carmaker Citroen revealed the prices of its mass-market hatchback, the C3, available in Live and Feel variants. Its top-spec variant comes with a turbo petrol engine, and it’s one of the most affordable turbo hatchbacks on the market. The standard C3 gets a 1.2-litre naturally aspirated (NA) petrol engine; both powertrains claim fuel economies of over 19kmpl.

The Grand Vitara name has made a comeback in India with a new compact SUV born from Maruti’s partnership with Toyota. Similar to the Hyryder, it gets mild hybrid and strong hybrid powertrains with an all-wheel drive (AWD) option offered on the former. The Grand Vitara is expected to be launched in September and bookings are already underway.

Mahindra revealed the Scorpio N’s full price list including the automatic and 4×4 variants. The burly Scorpio N spans a wide range of budgets, with the entry-level petrol SUV priced at Rs 12 lakh and the base 4×4 at Rs 16.44 lakh (all prices ex-showroom). Bookings for the Scorpio N will begin at 11 am on July 30, and the first deliveries are expected to begin in September.

Porsche’s quickest, most powerful coupe-SUV, the Cayenne Turbo GT, made it to India at an eye-watering price tag. It has Porsche’s most powerful twin-turbo V8 engine under the bonnet, producing 640PS – enough to get from 0-100kmph in barely 3.3 seconds. It has a stiffer air suspension setup than the Cayenne Turbo, alongside a lighter exhaust system and a revised Porsche Traction Management system.

Maruti will finally update its entry-level compact hatchback with the all-new Alto on August 18. It’s likely to be based on Maruti’s Heartect platform, and spy shots indicate that it has larger proportions than its predecessor, the minuscule Alto 800. It’ll likely use the existing 0.8-litre petrol engine as before, but we could see Maruti’s ultra-efficient and more powerful K10C engine from the Celerio under the Alto’s bonnet.

The Mercedes EQS will debut in India on August 24, starting with the top-spec AMG variant that’ll be imported as a completely built-up unit. Later this year, the locally assembled EQS 580 sedan will be launched with a 523PS dual-motor AWD powertrain. The EQS is Mercedes’ flagship electric vehicle in global markets.

Toyota took the wraps off its new Crown Series of flagship vehicles in crossover, sedan, estate and SUV body styles. Honda introduced the eleventh-gen Civic in a new Type R avatar – the most powerful hatchback of its kind yet. Meanwhile, Hyundai is a step closer to taking to the skies with its new partnership with Rolls Royce Electric to build hydrogen-powered flying taxis.