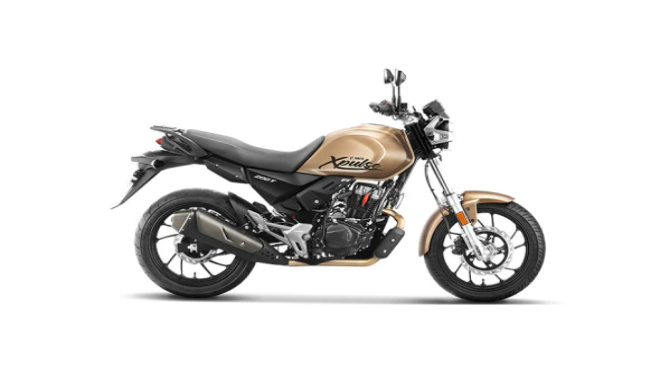 Besides the engine tweaks, there are also a couple of new cosmetic bits on the bike

The Hero XPulse 200T 4V has been spotted in an undisguised look, perhaps undergoing its TVC shoot. While the XPulse 200 4V has been quite a hit amongst Indian enthusiasts, its naked avatar, not so much.

The XPulse 200T’s appeal has been a bit confusing. But these are strange times that we live in. So, the chances are that the 4-valve updates, which the adventure received, could make currently Hero’s only 200cc naked more appealing. That’s what Hero is hoping for.

It remains more or less the same XPulse adventure bike-based naked and the engine updates, like the 4-valve head, revised gear ratios, and a larger oil-cooler, are likely to be arrive here as well.

What we can also spot is the XPulse 200T now sporting a small windshield and fork gaiters, to sort of complete the retro look that it is going for. It might also get brighter colours. We hope that Hero improves the suspension tune as we found it to be a bit firm.

While these new bits should enhance its appeal, what we would have really liked is for Hero to go down the supermoto path for the XPulse 200T 4V. After all, it was one of the possible iterations of the bike that was shown at EICMA a few years ago. Hey Hero, get that please!