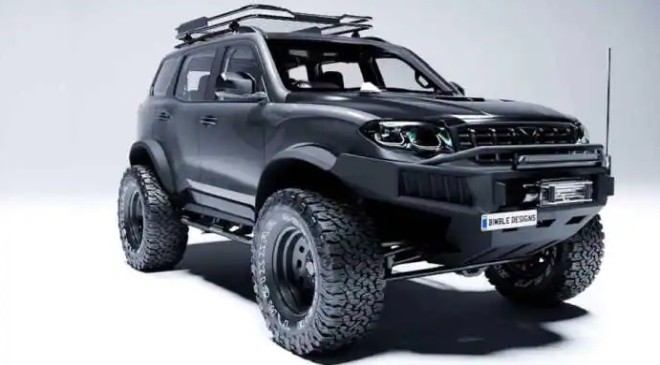 The 2022 Mahindra Scorpio-N was launched in India recently at Rs 11.99 lakh (Ex-showroom, introductory pricing) and later prices were announced for the AWD and AT versions as well. The Indian UV maker, on July 30, opened bookings for the New Mahindra Scorpio-N 2022 and all hell broke loose with the new SUV garnering 25,000 in just 1 minute, and more than 1 lakh bookings in 30 minutes, highlighting the love for the moniker in India. While buyers have registered their love by record bookings, digital artists have been on the case of new Scorpio-N ever since it was first revealed. We have seen multiple iterations of the prospective Scorpio-N variants, including Black Edition, Off-roading ready SUV and even race spec R variant.

Now an independent graphic artist has rendered the 2022 Mahindra Scorpio-N and gave it his own idea of Black Edition extreme Off-Roader. Called the Wild Brothers Concept, the rendering has been prepared by Bimble Designs, who has previously given us some credible examples of Scorpio-N variants. This one, painted in an all-black paint reminds us of extreme off-roaders.

The front fascia of the imagined Scoprio-N gets off-road bumper for better approach angles, while there is a prominent underbody bash plate to prevent it from any major underbody damage. The front grille has been finished in piano black paint and get aux LED light bar and a winch mount. At the side is a lift kit in addition to larger off-road tyres.  The fenders have been trimmed to adjust the large steel rim wheels while a functional rock-slider too has been added. There’s no cabin pics shared by the designer.

The new Mahindra Scorpio-N is being offered with AWD variant for off-roading capabilities and gets two engine options – 2.0L petrol and a 2.2L diesel. The petrol makes 200 bhp and 370 Nm of peak torque, while the diesel gets 175 hp and 400 Nm output.