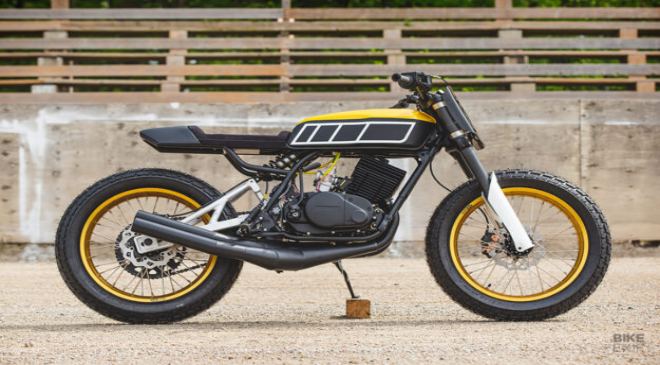 This custom bike makes over 50PS and weighs just 150kg

Cam Smyth, a Canadian designer has showcased his latest build: the 427 Tracker. Some may have guessed it to be a Yamaha from its ‘Speed Block’ livery, but there’s a lot more to this motorcycle than what meets the eye.

The 427 Tracker is based on the 1976 Yamaha RD400. However, there’s very little that the custom motorcycle shares with the original icon. For starters, the original engine has been completely rebuilt and is also bored-out with new cylinder heads developed by HVC Cycles. The new 427cc engine gets bigger intakes from Banshee, V-Force 3 membranes and TM32 carburettors from Mikuni and finally, a hydraulic clutch system. Of course, Smyth has built a custom exhaust to complete the package.

This custom motorcycle features some respectable hardware. Its suspension includes upside down fork from a Suzuki GSX-R 600, and a modified monoshock from a Yamaha Enduro bike. Smyth lengthened the swingarm by a few centimetres to accommodate the new 19-inch wire spoke rim. For braking, the 427 Tracker gets Galfer-sourced petal discs with calipers from a Kawasaki Ninja 300.

Read More:-India soon to get new category of vehicle that can ply as two and three-wheeler – Details

To make this motorcycle street legal, Cam Smyth has equipped the motorcycle with a very cleverly hidden headlight and tail light. A vertical LED bar has been placed behind the translucent face shield at the front, which acts as the headlight, while the tail light has been tucked under the seat cowl for a clean look.

Thanks to the minimal bodywork and use of light components, the motorcycle tips the scales at a mere 150kg. That’s pretty light for a bike that pushes out 50PS.

Smythinnovations has not quoted the price for a job like this, however, given the work and the parts that this Yamaha 427 Tracker packs, it surely won’t come cheap.