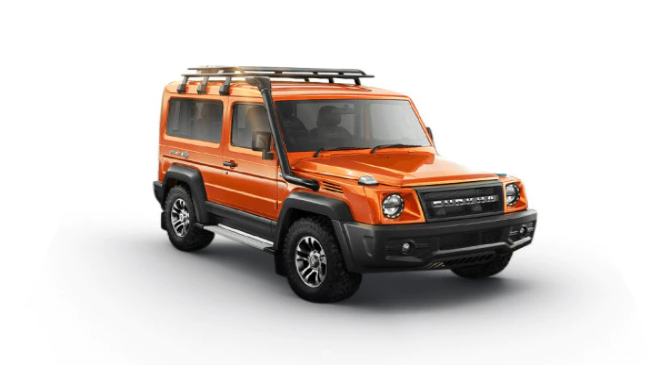 We’ve long known that Force Motors is looking to expand its small market niche with more Gurkha-derived off-roaders. A new spy shot of the 5-door Gurkha in near-production guise likely showcases the nine-seater version with two jump seats in the third row. The upcoming SUV is expected to debut later this year, with prices starting above the existing three-door Gurkha’s Rs 14.50 lakh (ex-showroom).

Read More:-Battle Of Electrics – May The Best Scooter Win

The existing three-door Gurkha is a four-seater SUV; but unlike the Mahindra Thar, it gets a pair of captain seats instead of a single bench rear seat.

On the other hand, the five-door Gurkha will be available in six-seater and eight-seater layouts, with the option to have third row captain seats or jump seats in the last row. Previously, the Gurkha had been spied in its 6-seater configuration and an RTO document had revealed the seating options as well. In comparison, the Gurkha’s 5-door predecessor could seat up to seven people.

Read More:-There’s A New Ferrari, But You Can’t Drive It On The Road

The spied Gurkha gets options for seating up to nine occupants – three in the second row bench and the two jump seats at the rear that can accommodate four occupants.

While the jump seats will seat more people, the layout isn’t ideal for safety, given their lack of three-point seatbelts and close proximity to other last row passengers.

A conspicuous snorkel air intake tells us that the long-wheelbase Gurkha is likely to be equipped with a similar off-roading kit as the three-door version and a 2.6-litre diesel engine under the bonnet. The engine makes 91PS and 250Nm in the smaller Gurkha, but the long-wheelbase version could be tuned for more power and torque, given its larger seating capacity.

The Gurkha’s standard 4×4 system comes with a low-range transfer case and manually locking front and rear differentials. That said, the larger dimensions means off-road prowess, especially the approach, departure, and break-over angles could be significantly different over the three-door model. For instance, the smaller Gurkha offers approach, departure and break-over angles of 37 degrees, 25 degrees and 25 degrees, respectively.