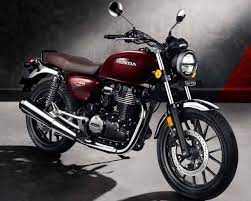 Honda has teased its upcoming 350cc bike again. This time around, the brand has shared a video containing the words ‘Fierce design’, ‘Fast acceleration’, ‘Furious stance’, ‘Fighter Attitude’ and ‘Fearless Performance’, along with the tagline ‘The Formidable’. All these aggressive sounding words point out to the possibility of a street-oriented machine, something along the lines of the Triumph Speed Twin 900.

Given that the bike is going to be launched just a day after the launch of the Royal Enfield Hunter 350, Honda is likely to bring something similar to the upcoming Royal Enfield bike. Expect the design to be a little more modern than the H’Ness CB350, with 2000-ish vibes than retro 80s. To keep the costs in check, Honda might use fibre body panels, and the headlight could be a halogen unit. Honda might also offer a simpler instrument cluster minus Bluetooth connectivity.

While the 21PS, 30Nm, 349cc counterbalanced, air-cooled engine is likely to remain unchanged, we’d love it if Honda tunes the gearing for a stronger bottom-end grunt. The bike could roll on smaller 17-inch wheels, and the suspension could be tweaked accordingly as well. All these changes could result in the bike being lighter than the H’Ness; and consequently, it should translate to sprightlier performance out in the real world. The tyres could also be slightly slimmer than the ones in the CB350 twins which should ensure lower rolling resistance, and thereby better fuel efficiency.

Honda could also offer the upcoming bike (let’s call it the Honda CB350F considering the generous alliterations starting with ‘F’) in two variants, one likely with a rear drum and a single-channel ABS. The upcoming Honda CB350F will also help the Japanese manufacturer prepare itself against the arrival of the Bajaj Triumph bike. Honda could price the bike lower than the H’Ness CB350, perhaps at around Rs 1.85 lakh (ex-showroom). We’ll have to wait till August 8 to see what exactly Honda brings. Until then, stay tuned!