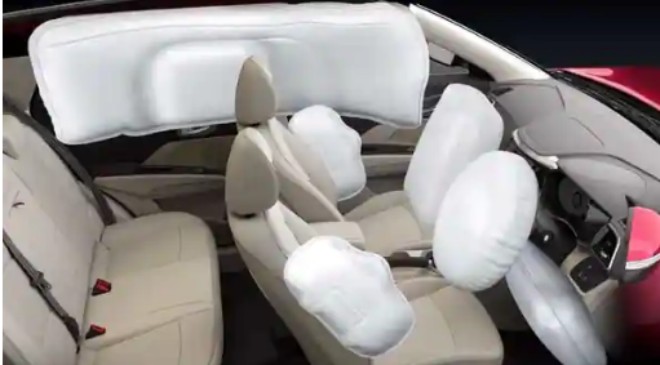 Union Minister of Road Transport and Highways, Nitin Gadkari, while speaking during the question hour in Rajya Sabha recently, stated that the mandatory 6 airbags rule in cars will hurt the car buyer’s pocket, after questions were raised by some automakers on the price hike in the vehicles once the rule is implemented. Nitin Gadkari said each additional airbag will only cost Rs 800, which is bearable for customers who can afford cars. He said that the government has already made dual front airbags mandatory for all passenger vehicles sold in India.

For the safety of passengers at the rear seats in vehicles that can carry upto 8 people, the government will make 6 airbags rule mandatory by adding side and curtain airbags. This will add 4 more airbags to a vehicle, and as per the Minister, that will increase the cost by only few thousand rupees, that car buyers can afford. The new rule can be implemented as early as October 2022.

Earlier, budget automakers like Maruti Suzuki showed their lack of interest in implementing the proposal, staying that the norm will adversely hit the already shrinking small car market. The company said that the regulation would largely impact the cost-sensitive entry-level car segment — which has been facing headwinds and witnessing dwindling sales over the last three years — making it even more difficult for two-wheeler users to upgrade to small cars.

MSI Chairman RC Bhargava said the cost of the entry-level cars has already gone up considerably due to the implementation of various regulatory norms in the past few years, including the BSVI emission regime from April 1 2020.

With prices going up, the sales of small cars have been impacted especially in the non-metro markets across the country, the veteran industry leader noted. He cautioned that with the implementation of the six airbag regulation the prices will further go up leading to further shrinking of the domestic small car industry.

“So, the fear is that due to this (six airbags) the market will become smaller. The car manufacturing sector is important because it is a big creator of employment. When the car sells in the market it creates many jobs — drivers, maintenance, repairs, accessories etc,” Bhargava stated.

He further said: “If the car market does not grow like what has been happening in the last three years it will have an adverse effect on job creation and economic growth.” When asked how much the price of cars could go up due to the addition of airbags, Bhargava said: “I am not sure but it could be in the range of Rs 20,000-25,000, which for a small car buyer is a lot of money.”

He noted that there were not many countries across the globe, which may have implemented such a regulation. “I think, we will be among the first countries to do that…So we in the industry think that it is not the right time to bring six airbag regulations. We would like the government to reconsider this matter,” Bhargava said.

He noted that with a hit on the affordability factor, small car offtake is shrinking in the smaller cities, towns and rural areas while the market for expensive cars in urban centres was going up across the country. MSI is the dominant player in the hatchback segment with a market share of over 70 percent. It sells models like Alto, S-Presso, and Celerio, among others, in the vertical.