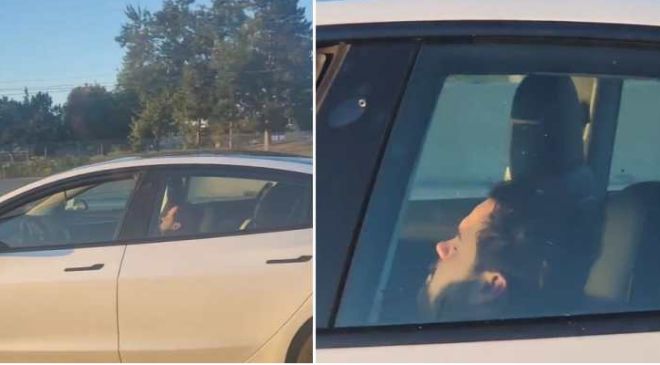 In the viral video, the Tesla driver can be seen sleeping in his seat while the car is driving in self-driving mode; the video shows that the driver’s eyes are completely closed.

Tesla owners often make the headlines for being too relaxed in their cars while it’s on autopilot. There have been multiple reports where the Tesla drivers displayed carelessness while the car was in self-driving driving mode. In fact, there have been multiple reports of drivers falling asleep in their electric vehicles while still in the driving seat. Adding to the list of such reports is a video of a Tesla driver who dozed off in his driving seat while the car was on autopilot mode driving on highway. In the video, the system of the car seems to be working fine. However, it doesn’t cover the fact that the driver was in a dangerous situation, completely relying on the car.

Read More:-Tata Tiago EV to launch soon – could be the cheapest EV from the car maker

In the video, the driver appears to be deep in sleep while the car keeps on driving. The video clearly shows the driver lying back on his seat while the camera zooms to show that his eyes are closed. However, after the video went viral on social media, many came forward to analyse the situation. One of the social media users pointed out that the Tesla car shouldn’t let this happen, and chances are that the video is fake.

#WATCH: A man was seen sleeping behind the wheel of his Tesla on the QEW this morning pic.twitter.com/MHZyRneZqc

He suggested that Tesla cars do not allow drivers to do this. To support his claim, he explained, the camera present in the car’s cabin constantly monitors the driver’s eye and requests steering wheel pressure after every few seconds. Moreover, if the conditions are not fulfilled, the car starts beeping until the requirements are fulfilled.

It is to be noted that Tesla’s Autopilot is really just a collection of driving aids that allow the vehicle maintains a constant speed while navigating its lane. The technology employs adaptive cruise control with stop-and-go, a standard feature on many modern automobiles. In addition, it includes other safety features like automatic emergency braking and pedestrian detection, as well as a variety of lane-keeping technology. All of these elements are intended to “help” drivers and lessen the possibility of a major accident.