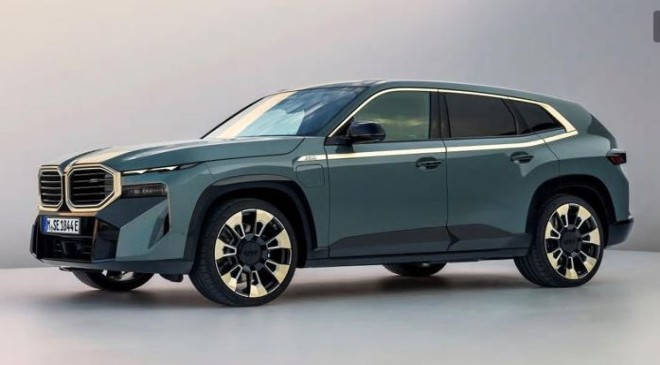 BMW has unveiled the XM SUV, the first car from the brand’s high-performance arm to feature an electrified powertrain. The XM is also the first dedicated SUV from BMW M and only the second car to be built from the ground up by BMW M after the BMW M1.

The silhouette of the XM resembles that of other BMW SUVs.

Visually, the BMW XM does share its silhouette with other BMW SUVs such as at X5 but gets a very distinctive look thanks to the new split DRL/headlamp setup part of the brand’s latest design language. The front features large octagonal kidney grilles with horizontal slats and gold-coloured surrounds along with very aggressive styling and large air intakes. The rear is characterised by sculpted LED tail lamps and vertically stacked dual-tip exhausts. It rides on 21-inch alloy wheels with optional 23-inch ones also available.

The cabin of the BMW XM features a two-tone theme of Vintage Coffee Merino leather and Soft Nappa leather. The headliner comes with LED lighting which changes colour based on the selected drive mode. It comes with a driver-focused cockpit with M-specific display modes for the infotainment screen, carbon paddle shifters, M-specific pedals and a sporty theme.

The cabin of the BMW XM features a two-tone theme of Vintage Coffee Merino leather and Soft Nappa leather.

The XM is BMW M’s first car to come with an electrified powertrain. The plug-in hybrid system uses a 4.4-litre V8 which makes 483bhp and a 194bhp electric motor which translates to a combined output of 644bhp and 800Nm. The car gets AWD, which is configurable depending upon mode and is capable of sending a majority of the power to the rear wheels. It also gets torque vectoring, sending power to the outside wheel for grip during cornering. The XM gets rear-wheel steering as well. The brand will unveil a more powerful variant of the car named BMW XM Label Red in the future.

Following the XM, BMW is expected to unveil the new BMW M2.