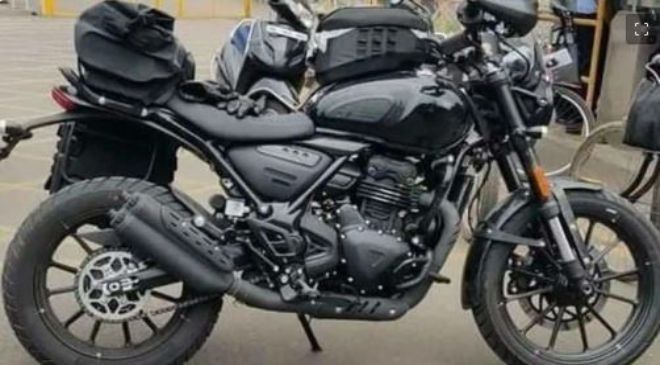 Bajaj and Triumph are planning to launch a new 350-cc motorcycle in India. The bike is still in the development phase and has been spotted testing for the first time on Indian roads. Based on the engine capacity and the looks, the bike will be a scrambler and will compete against Royal Enfield and Honda bikes with similar engine capacity. The bike is a result of a partnership between Bajaj and Triumph announced in 2017 to produce mid-level bikes for the Indian market. The test mule of the bike spotted is the first of the bikes developed in their partnership. Reports suggest that the bikes will be developed by Triumph while Bajaj will handle the production.

The Bajaj-Triumph motorcycle appears to follow a classic aesthetic motif with a touch of modernization based on spy photos. The circular headlamp configuration is accompanied up front by a set of retro-inspired indicators and rearview mirrors. The two-wheeler has a traditional handlebar configuration and a prominent visor to ensure the best possible wind deflection.

Moreover, The fuel lid, which is finished in chrome on top, gives the fuel tank a quite robust appearance. The bike has few body panels, mirrored in how much of the frame is left exposed. With a split seat design and a back grab grip for the passenger. In addition, the test mule is loaded with multiple accessories like knuckle guards, tail bag, tank bag, tank pads, and a saddle bag on the left side.

Although there isn’t much information available at the moment, the bike will most likely have a single cylinder, air plus liquid-cooled engine with a displacement of between 350 and 400 cc. It will be coupled to a 6-speed toe-shift transmission. The system’s power output will be comparable to that of its direct competitors. Similarly, there is no information on the pricing of the bike but it is expected to be closed Rs 2-3 lakh (ex-showroom).