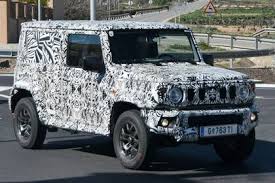 The India-spec Jimny 5-door interior has been spotted for the first time, giving us a sneak peek into the cabin

The five-door variant of the Maruti Suzuki Jimny is the latest model to fall under the automotive paparazzi’s radar. Each time the SUV is being snapped, there is a new detail that comes to light. The latest set of spy shots give us a sneak peek into the upcoming SUV’s interior for the first time in India.

The larger SUV’s dashboard is almost identical to the smaller three-door model. Not a bad thing, in our opinion, as the Jimny’s interior is logically laid out with chunky controls. However, there could be a big difference: it seems to get the larger 9-inch Smartplay Pro+ infotainment system instead of the smaller seven-inch unit, as the bezels are smaller in the test mule.

Other features onboard should be similar to the three-door model, which gets an automatic climate control, steering-mounted audio controls, cruise control, analogue dials with a multi-info display, and power windows. Passenger safety should be taken care of by up to six airbags, ABS with EBD, electronic stability control, and probably, a 360-degree camera as well.

The five-door Jimny should get the new 1.5-litre K15C engine from the Ertiga and Grand Vitara developing 103PS. It should be paired with a five-speed manual transmission and a six-speed automatic transmission. We wouldn’t rule out the 1.4-litre, Boosterjet, turbo-petrol unit as a top-end engine option. The Jimny will get a four-wheel drivetrain with a low-range transfer case for serious off-roading prowess.

Earlier spy shots have already revealed the fact that the Jimny five-door will be a size smaller than the Mahindra Thar. Wraps are expected to be pulled off at the Auto Expo 2023, and it could be rechristened as the Gypsy in India. It will lock horns with the upcoming Force Gurkha five-door and Mahindra Thar five-door.