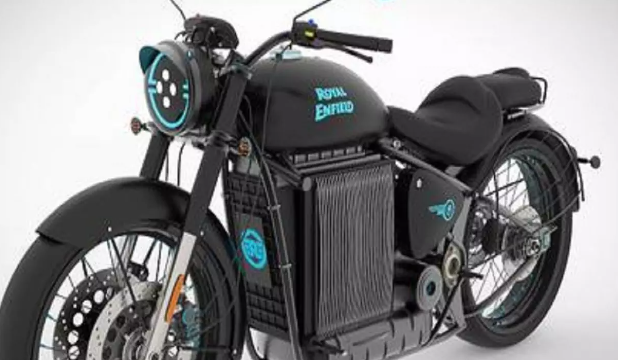 – Still in its early stages of development

Many two-wheeler manufacturers have onboarded the electric mobility wave; Royal Enfield is the latest. The company’s electric motorcycle project has likely been in the works for a while but the first image has been leaked. Here’s what we can deduce from the leaked visuals.

Royal Enfield’s first electric motorcycle is currently dubbed the Electrik01. The bike is still in its concept stage and will follow the brand’s traditional design language. From the leaked image, the concept model gets neo-retro styling, a round headlight, and a conventional fuel tank too. It gets a unique chassis with a section above the fuel tank and another below the battery pack.

Further, the Electrik01 also gets girder forks at the front and alloy wheels. Now, the latter is quite common but girder forks were in the application in the retro offering of yesteryear. As mentioned above, the model is in its early stages of development. And Royal Enfield has also spent a fair amount of time and resources in the testing of its petrol offerings that are slated to launch in the coming years. So, the electric motorcycle’s debut could take longer than you’d expect.

Royal Enfield also unveiled its latest middleweight offering, the Super Meteor 650, in India last week. The bike took the stage at Rider Mania 2022 and is now set to be launched very soon in January. We also have an update on the Super Meteor 650’s delivery timeline and you can head here to read about it.