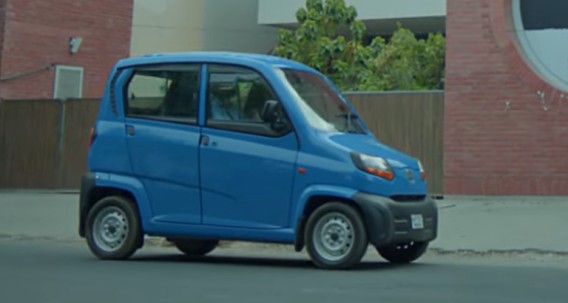 Bajaj Qute 4W automobiles will be available for purchase very soon. Now you, as a private buyer, will soon be able to purchase a Bajaj Qute that was initially launched as an auto taxi.

Bajaj Qute will be available for personal use soon

As of present, the Bajaj Qute is exclusively available for commercial use. However, it will soon be available for private purchase across the country.

According to the most recent NCAT type clearance, the 2023 Qute is now more powerful, weighs an additional 17 kg, and can be purchased and registered in the private/non-transport category as well. The price has not yet been determined.

The term “quadricycle” is not well known in India. This vehicle is a bridge between a three-wheeler and a four-wheeler and is not subject to the same laws as cars. This quadricycle battle is why it took Bajaj so long to launch Qute in 2018.

It was designed to be an autorickshaw substitute and was priced at Rs. 2.48 lakh (ex-SH). Both have three seats, but Qute has a monocoque construction and a fixed roof, which provide comfort, protection, and a barrier from harsh weather.

Bajaj intended to launch Qute for private buyers; however, this did not occur at the time of the 2018 introduction. Bajaj has finally received approval for the Qute type in the private/non-transport category. Because it is still a quadricycle, top speed is expected to be limited to 70 km/h. However, power has increased to 12.8 horsepower, up from 10.8 hp. This should result in faster acceleration, shaving a second or two off the top speed of 70 km/h.

Along with increased power, weight has increased by 17 kg.

What’s new in this model?

Previously, a petrol-only Qute weighed 451 kg, while CNG exceeded 500 kg. A kerb weight of 468 kg is specified in the type approval. The Bajaj Qute 4W has sliding windows rather than rolling windows, which are popular in cars.

There is also no provision for any type of air movement. It means there will be no AC, even as a paid option. This type of clearance also makes no mention of a CNG variation.

The additional 17 kg of weight is most likely owing to the addition of standard windows and air conditioning. Seating for four individuals, including the driver, will be severely limited.

The Bajaj Qute 4W is powered by a 216 cc single-cylinder engine that produces 10.8 horsepower and 16.1 Nm of torque. Power has increased by 2 bhp to 12.8 bhp, and torque is expected to remain unchanged.

A 5-speed sequential gearbox with reverse gear, similar to that seen in an autorickshaw, is mated to this engine. There is no “H” pattern gearbox.

The price at the time of its debut in 2018 was Rs. 2.48 lakh. Given that it is 2023, expect a higher price tag of roughly Rs. 2.8 lakh. If Bajaj includes air conditioning and other standard conveniences, this price would be fully justified.

In comparison, India’s cheapest “car,” the Maruti Alto 800, starts at around Rs 3.4 lakh ex-showroom at present.