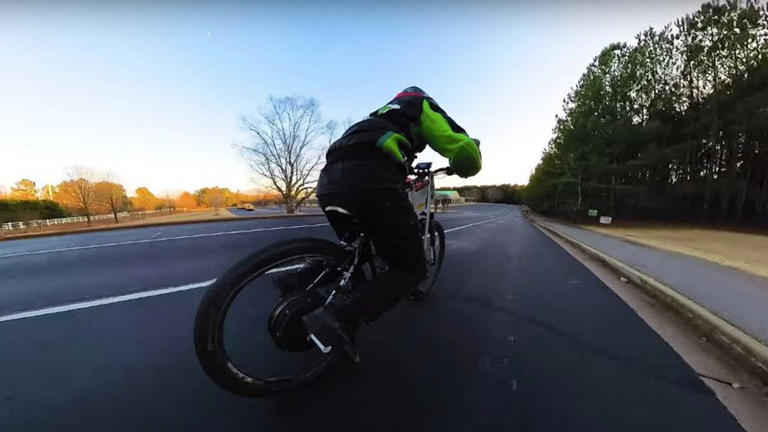 This homemade contraption cranks out close to 20 horsepower.

It’s crazy what you can cook up with an old bicycle, an electric motor off the internet, basic electrical and mechanical know-how, and a lot of guts and patience. Indeed, while rules and regulations surrounding e-bikes are indeed a lot more lax in the U.S. compared to other parts of the globe, what we have here today is certainly not road legal.

Nevertheless, it’s a remarkable representation of just how much performance you can eke out from an electric motor. Showcased in a YouTube video by a channel called All Things Electric, this dude transforms his old Trek mountain bike into an electrified machine that’s packing some serious power.

As you can see, the bike is thoroughly a backyard build. I mean, the dude even shows us how he fabricates makeshift foot pegs that mount directly onto the rear axle. The bike still has its stock cranks and pedals, but doesn’t have a chain. Needless to say, this contraption would make for quite a messy accident should things go sideways. Luckily, the build seems to be going smoothly.

Diving into the specifics, the DIY electric bicycle employs a 5,000-watt hub motor with a peak output of 14,000 watts. That’s approximately 19 horsepower—about the same as a 200cc gasoline-powered motorbike. On top of that, the bike runs on a custom-made battery pack, which, judging from how bulky it looks, is probably heavier than the bike itself. The entire system is managed by a Sabvoton 72150, something you can pick up off the internet for little more than $200 USD.