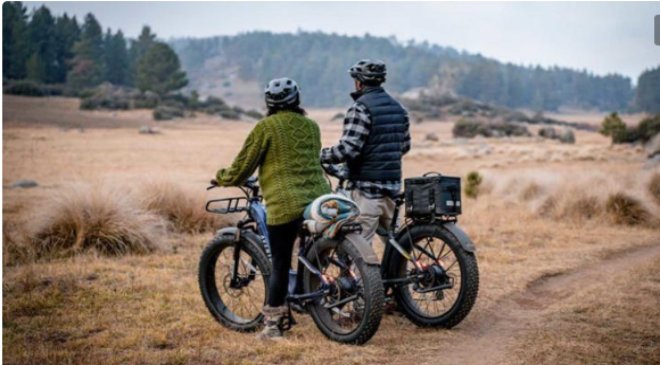 The updated model now gets a torque sensor and added practical amenities.

California-based e-bike manufacturer Aventon has been making waves in recent months with its selection of practical and stylish electric bicycles. Like most e-bike manufacturers, Aventon is based in the U.S. but outsources production to China. The result is a fleet of e-bikes that’s  affordable and loaded with tech.

Speaking of Aventon, the brand has just launched yet another model: the Aventure.2 fat-tire e-bike. As its name suggests, the fat-tire e-bike is now on its second generation, and Aventon has bestowed quite a few updates to this machine. More specifically, the Aventure.2 now has a torque sensor-equipped pedal assist, which means it can better deliver a more natural pedal feel.

On top of that, Aventon caters to riders of all backgrounds by offering the Aventure.2 in two variants—step-through and step-over. The step-over version comes in a camouflage green colorway or a stylish slate gray, while the step-through bike is finished in either black or cobalt blue. Both bikes’ frames are made out of double-butted aluminum alloy, so you can be sure of their rigidity. The trade off is that they’re a bit heavy at 35 kilograms.

On the performance side of the equation, the Aventure.2 makes up for its heavy weight with quite a punchy motor. Strapped onto the back wheel is an electric motor with 750 watts of nominal output and 1,130 watts of peak power. This gives the bike a top speed of 28 miles per hour on assist. This motor is paired to a 48V, 720Wh battery pack that’s integrated into the frame. With this setup, Aventon claims a range of up to 60 miles on a single charge.

Overall, Aventon offers the Aventure.2 at quite a good deal with a sticker price of just $1,899. Even better, the company offers free shipping within the U.S. Feel free to learn more about the company’s wide selection of electric bicycles by visiting their official website in the source links below.