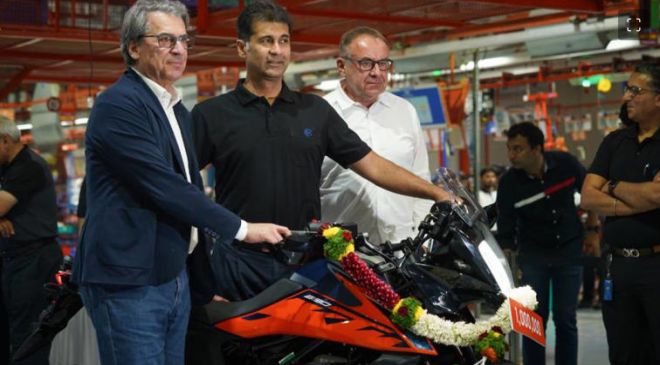 Bajaj Auto Limited and KTM partnership achieved a critical milestone today as the brand rolled out the one-millionth KTM 390 Adventure from its Chakan facility in Pune, Maharashtra. Back in 2012, the Austrian firm entered the Indian market with the introduction of the 200 Duke, which was also the first-ever KTM to roll out from the Bajaj’s Pune plant. Notably, the plant also produces Husqvarna motorcycles. KTM currently offers nine distinctive models in the market across the street naked, sports, and adventure categories, including the 125 Duke, 200 Duke, 250 Duke, 390 Duke, RC 125, RC 200, RC 390, 250 Adventure, and 390 Adventure.

Furthermore, the two-wheeler maker started a new Pro-XP experiential programme for its customers in India, covering specially designed track, street, and off-road adventure events. The off-road adventure category has four subsets, namely tours, academy, trails, and escape, while the street category offers three subsets: power rides, pro gateways, and urban escapes. For this, it introduced the KTM Pro-XP app three years ago for its customers to virtually get together to communicate, start or join a ride, and track ride data. Above all, they can also book curated Pro-XP events and tours via the app. Meanwhile, the brand has organised the KTM RC Cup championship across eight cities in the country from January to March 2023. This event will witness the participation of over 1,000 racers taking part in 250 races. In the end, the winners will stand a chance to receive training in Austria from KTM race director and former MotoGP racer Jeremy McWilliams.