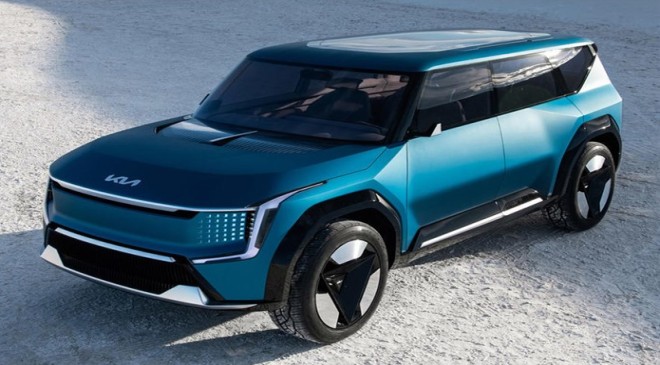 Kia India’s pavilion at the Auto Expo 2023 showcased the recently launched Kia EV6 and the soon-to-be-launched new Kia KA4 (Carnival). Alongside its compatriots, Kia also displayed its latest electric concept, the EV9 Concept. What is it all about? Here’s all about it through an image gallery.

The Kia EV9 Concept front fascia adopts the brand’s ‘Opposites United’ design philosophy and with it comes the digital tiger face with a closed-off body-coloured grille flanked with a neatly integrated star-like pattern which merges into the vertically-placed LED DRLs. Further, the contrasting silver accent on the front silver skid plate gives it a modern touch. Overall, the tall stance and flat surfaces make the EV9 look grand and stately.

The EV9 Concept will be the biggest electric SUV to be based on the E-GMP platform measuring the tape at 4,927mm in length and a 3,099mm wheelbase. Towards the side, the EV9 looks imposing with the flared wheel arches, rear-hinged doors, and a large glass area sans the B-pillar.

The rear imitates the front with vertically placed LED tail lamps, a protruding spoiler, a more pronounced bumper, and the new Kia logo.

Inside, the EV9 being in its concept form features a large dual-screen setup and a spoke-less square steering wheel with rounded edges. The centre console holds a long armrest and the lack of a transmission tunnel frees up more storage space.

The EV9 will be a full-sized SUV with a three-row layout. Furthermore, the second row of the EV9 can be folded completely flat while the front row seats can be rotated to face the rear row to create lounge-type seating.

The production-spec Kia EV9 is likely to be powered by a 77.4kWh battery pack. While the power output figures are not known yet, the company states that the electric SUV will support fast charger with a charging time of around 20 minutes for 10 to 80 per cent.