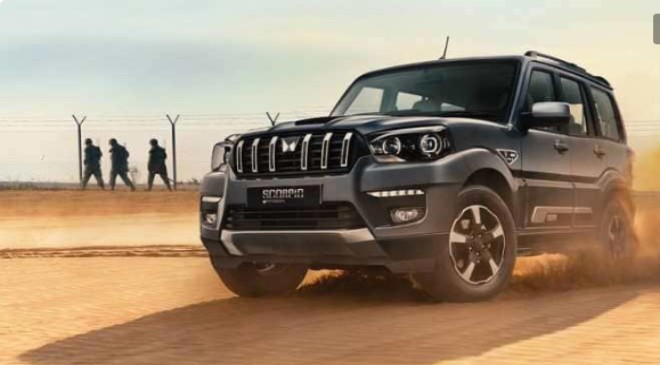 Mahindra Scorpio SUV is set to join Indian Army’s fleet. The company reportedly will be supplying 1470 units of the SUV to the armed forces and is ready to start the dispatch. A batch of this army-spec Scorpio Classic SUV was spotted ahead of the dispatch exercise. The specially designed unit of Mahindra Scorpio Classic 4×4 was wearing an olive-green shade, which is commonly used on army vehicles and uniforms. In comparison, the standard Scorpio Classic is available in Pearl White, Galaxy Grey, Red Rage, Dsat Silver, and Napoli Black options.

In the photos accessed by our friends at RushLane, the army-spec SUV appears to have the same design elements as the standard Scorpio Classic – standard slatted grille, projector headlamps and LED DRLs, thick body cladding and functional roof rails.

As Army vehicles need to be more robust and sturdier, army-spec Mahindra Scorpio Classic has been improvised. At the rear, the upper section of the vertically stacked taillights has been replaced with black panels. Moreover, a trailer hook has also been added at the rear. This could be employed for moving small calibre artillery guns and other weapon systems.

It is very much possible that Indian Army’s Scorpio Classic will have more such modifications and special features. However, the details about the same are not available in public domain. The four-wheel-drive capability of the SUV will be very handy in the rough terrains of the Himalayas. Therefore, the induction of Scorpio Classic SUVs will go a long way in the movement of personnel and supplies in a timely manner.

It is worth noting that the 4×4 feature is not on offer with the standard Scorpio Classic. Mahindra launched the new generation Scorpio-N last year. However, the Indian carmaker has continued to sell the older iteration of the SUV as Scorpio Classic. The Scorpio Classic SUV isn’t as technologically advanced as the Scorpio-N. But the SUV retains its charm due to its iconic status.

Mahindra Scorpio Classic is powered by a 2.2-litre diesel engine that generates 128 bhp of max power and 300 Nm of peak torque. It is mated to a 6-speed manual gearbox. The SUV price starts at Rs 11.99 lakh (ex-showroom) for the base variant, going up to Rs 15.49 lakh for the top spec model.