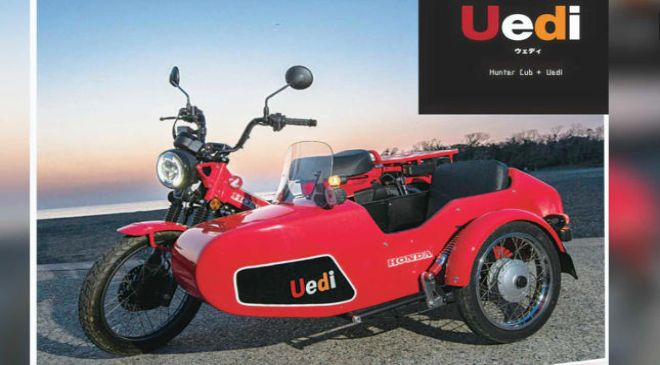 A Japanese specialist shop created it, along with other sidecar options (including one for the Monkey).

What do you think about when you think about sidecars? It might be Urals, or one of the sidecar kits that people have developed for BMWs, Triumphs, Moto Guzzis, and other machines over the years. Maybe you’re really into sidecar racing, which is a completely different category—or maybe you’re a bartender, which is another category, as well.

While it’s true that people have developed sidecars for a number of machines, one that might not immediately come to mind is the Honda CT125 Hunter Cub. A shop in Chiba, Japan, called Auto Staff Suehiro, has created a sidecar specifically to fit the Hunter Cub—and it’s exactly as adorable as you would expect. There’s also a luggage space behind the backrest, so you and your passenger can get away and take your luggage with you.

This sidecar is called Uedi, and the entire apparatus is licensed as a small motorcycle in Japan. Total vehicle measurements are 1.96 meters long by 1.39 meters wide (6.43 feet long by 4.56 feet wide). The MSRP on a Hunter Cub Uedi build from Auto Staff Suehiro is ¥1,031,800, which works out to about $7,901 as of January 23, 2023. Incidentally, it appears that interested riders have a choice: Suehiro can sell you a completely assembled bike and sidecar, or you can purchase the sidecar kit separately for use on your existing bike.

Wheels Of Three, Full Of Glee:

Watch Rhino The Dog Get Excited For His Sidecar Ride

A tonneau cover is included with purchase of the full vehicle, or can be purchased separately if you decide to only purchase the sidecar on its own. There’s also an optional windscreen, to make your sidecar rig extra comfortable for whoever’s in the chair.

This isn’t Auto Staff Suehiro’s first sidecar—or even its only sidecar. The company also makes sidecars for Honda Monkeys, as well as some other options. It also created the Ouroboros reverse trike, which is powered by a Yamaha FZR-1000 engine. Suehiro does all its builds and as much manufacturing and fabrication work as possible in-house. It also manufactures custom parts, and will do general maintenance on Yamaha, Honda, and Suzuki motorbikes as well.

If you’d like to see it in action, check out this video that Young Machine did (audio in Japanese) to get a better look at this rig out on the road. Like many sidecars, it’s not for everybody—but if it’s for you, then you’ll probably know it right away by the smile it puts on your face.